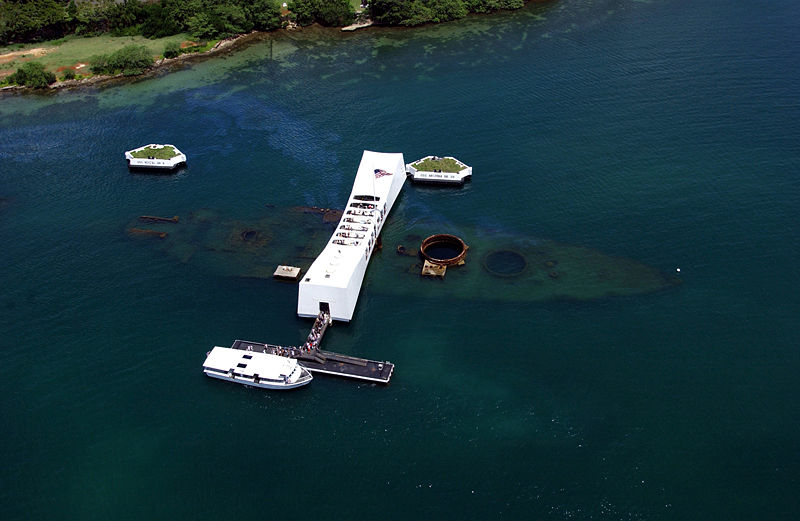 On December Seventh 1941 The empire of Japan launched a massive pre-emptive strike against the United States. The attacked targeted the US Navy harbored at Pearl Harbor Hawaii. 2354 military personnel and 57 civilians were killed during the attack. Among the loses were two battleships, 188 aircraft, and two destroyers. It was one of the US worst loses of the war and was the strike that launched the US into the second World War.

The USS Arizona sinking during the attack on Pearl Harbor, 7, December 1941.
Nine years after the attack, The Commander and Chief of the Pacific, Admiral Arthur Radford ordered that a flagpole be built over the USS Arizona and a plaque was placed at the base.

Thoughts for a memorial had begun circulating as early as 1943 but it wasn’t until 1961 that the building was finished. Designed by Alfred Preis the memorial was dedicated in 1962. The memorial was built over top the sunken remains of the battleship USS Arizona. It is now run and maintained by the National Park Service.

The memorial is open to the public and is free of charge. If you are planning to visit, plan to get there early as the site is very popular. There is also a 20 minute film that should not be missed. It is an historical account of the attack on Pearl Harbor. Then you can take a short boat ride out to the memorial itself. After the boat ride be sure to visit the memorial wall which lists the names of those who were killed on that fateful day.

No one visiting the islands should miss seeing this tragic reminder of the past.